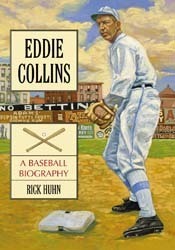 Click on any of the links below to order:

The following excerpt from the introduction to this biography offers an explanation of why I was drawn to write it:

After concluding my research, I realized that Eddie Collins was not only one of baseball's most consistently good batters, but perhaps also its best bunter and hit-and-run man, as well as one of its craftiest base runners and finest defensive second basemen. In addition, during his career he was repeatedly referred to as the game's smartest player, both on and off the field....He was certainly one of the game's highest-paid performers, a source of irritation throughout the years to lesser-paid players such as Chicago White Sox teammates Chick Gandill and Eddie Cicotte. I discovered that writing about Collins permitted me to learn about his playing days at Columbia University, where he starred as team captain in baseball as well as the starting quarterback in football. Then there was his professional career, first with the Athletics, then with the White Sox, and finally the Athletics again--teams which for many of the Collins years dominated the baseball landscape, giving rise to his frequent World Series heroics and reputation as one of baseball's best "money" players. Weaving in and out would be Collins' storied bosses, Connie Mack and Charles Comiskey, as well as teammates with names like Frank "Home Run" Baker, "Stuffy" McInnis, "Chief" Bender, "Shoeless Joe" Jackson, Ty Cobb, Tris Speaker and Mickey Cochrane. There would be an opportunity to take another look at the fabled Zimmerman boner in the 1917 World Series and the "Black Sox" scandal--this time from the perspective of one who did not conspire to defraud Chicago owner Charles Comiskey, but who played with this disparate bunch who many believed might be baseball's greatest team. Finally there was an opportunity to view and analyze Collins' post-playing career days as a general manager, vice president, and part owner of multi-millionaire Tom Yawkey's Boston Red Sox. Here Collins scouted and signed Hall of Famers Ted Williams and Bobby Doerr, but stood by as the Red Sox turned away Jackie Robinson. The Red Sox became the last organization to sign an African American baseball player when they might have been the first.

When I finished my course on Eddie Collins, I was convinced...(h)e was a fierce competitor whose "game" belied his [small size and] appearance and gave credence to his oft-repeated title "King" of baseball second basemen. I wanted to learn more and write his biography.

The Chalmers Race: Ty Cobb, Napoleon Lajoie, and the Controversial 1910 Batting Title that Became a National Obsession
A baseball story of dubious scorekeeping and statistical systems, of performances and personalities in conflict, of accurate results revealed seventy years too late, and of a contest settled not by play on the field but by human foibles.

Eddie Collins: A Baseball Biography
The exciting life and times of one of baseball's greatest second basemen while a key member of powerful Philadelphia Athletics and controversial Chicago White Sox teams from 1906-1930 and as an executive with the Boston Red Sox from 1933-1951.
The Sizzler: George Sisler, Baseball’s Forgotten Great
The story of Hall-of-Famer George Sisler, Ty Cobb’s “nearest thing to the perfect ballplayer.”