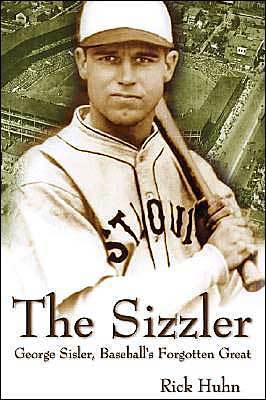 Click on any of the links below to order.

"Gorgeous George" Sisler, a left-handed first baseman, began his major-league baseball career in 1915 with the St. Louis Browns. During his sixteen years in the majors, he played with such baseball luminaries as Ty Cobb (who once called Sisler "the nearest thing to a perfect ballplayer"), Babe Ruth, and Rogers Hornsby. He was considered by these stars of the sport to be their equal, and Branch Rickey, one of baseball's foremost innovators and talent scouts, once said that in 1922 Sisler was "the greatest player that ever lived."

During his illustrious career he was a .340 hitter, twice achieving the rare feat of hitting more than .400. His 257 hits in 1920 stood for 84 seasons as the record for the "modern" era. Considered by many to be one of the game's most skillful first basemen, he was the first at his position to be inducted into the National Baseball Hall of Fame. Yet unlike many of his peers who became household names, Sisler faded from baseball's collective consciousness.

Now in The Sizzler, this "legendary player without a legend" gets the treatment he deserves. Rick Huhn presents the story of one of baseball's least appreciated players and studies why his status became so diminished. Huhn argues that the answer lies somewhere amid the tenor of Sisler's times, his own character and demeanor, the kinds of individuals who are chosen as our sports heroes, and the complex definition of fame itself.

In a society obsessed with exposing the underbellies of its heroes, Sisler's lack of a dark side may explain why less has been written about him than others. Although Sisler was a shy, serious sort who often shunned publicity, his story is filled with its own share of controversy and drama, from a lengthy struggle among major-league moguls for his contractual rights--a battle that helped change the structure of organized baseball forever--to a job-threatening eye disorder he developed during the peak of his career and popularity.

By including excerpts from Sisler's unpublished memoir, as well as references to the national and international events that took place during his heyday, Huhn reveals the full picture of this family man who overcame great obstacles, stood on high principles, and left his mark on a game he affected in a positive way for fifty-eight years.

The Chalmers Race: Ty Cobb, Napoleon Lajoie, and the Controversial 1910 Batting Title that Became a National Obsession
A baseball story of dubious scorekeeping and statistical systems, of performances and personalities in conflict, of accurate results revealed seventy years too late, and of a contest settled not by play on the field but by human foibles.

Eddie Collins: A Baseball Biography
The exciting life and times of one of baseball's greatest second basemen while a key member of powerful Philadelphia Athletics and controversial Chicago White Sox teams from 1906-1930 and as an executive with the Boston Red Sox from 1933-1951.
The Sizzler: George Sisler, Baseball’s Forgotten Great
The story of Hall-of-Famer George Sisler, Ty Cobb’s “nearest thing to the perfect ballplayer.”